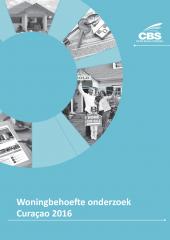 The initial questions of this survey served to explore the survey population to deduce which factors/developments had driven the population’s demand for housing between 2008 and 2016. This revealed certain demographic developments within that period which played a significant role in the development of the housing demand, namely an increase in the number of households, accompanied by a decrease in household size.

Not to be ignored is an observed stagnation in the concession of long-lease plots which, while not affecting the market as a whole, does affect those sections of the market where there is a pronounced demand for self-built homes.

Persons in need of housing with a preference for renting:

The housing demand for rented houses is fairly evenly distributed across all age groups between 18-59 years of age. Those in need of housing in this group have a median income between ANG 1000-1999 per month and are looking for two or three-bedroom rental houses. Most of those in need of housing within this group state that they would like to pay up to ANG 250 for rent per month. Most of these (87%) would like a rental or “hire purchase” house from the FKP.

Persons in need of housing with a preference for ownership: