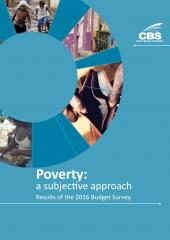 Subjective poverty lines are determined based on a qualitative and/or material (income) approach. One example of the qualitative method is the “economic ladder questions/ELQ” (asking respondents to indicate on which step of the [welfare-level] ladder they are). One example of the material method would be the income-evaluation question (“Is your current monthly income sufficient to make ends meet?”). In the 2016 Budget Survey, respondents were asked both qualitative and income-evaluation questions.

The subjective poverty line was calculated as of January 1, 2016 for the different household types and then indexed for January 1, 2017 and 2018. For 2016, the SPL for single-person households was ANG 1294.00. The poverty lines for specific household compositions can be derived using the OECD equivalence method. The first adult in the household is assigned a factor of 1, while all subsequent adults (age 18 and over) are each assigned a factor of 0.5 and all children (under 18), a factor of 0.3.

The following are some of the results:

Comparing different household-head ages, shows households headed by younger individuals (15-24 years) and those headed by persons of 65 or older to be the poorest.

With regard to household size, single-person households and those consisting of 5 or more individuals have a higher percentage of poor households as a proportion of households above the poverty line.

With regard to income level, it is not surprising to see that the two lowest income groups are also where the largest percentages of households below the poverty line are found.

Respondents were asked several questions aimed at measuring their perceived situation in life, for instance, whether the household income allowed them to make ends meet. A number of household characteristics were considered. With regard to the above-mentioned aspects, a distinction was made between households below and those above the subjective poverty line.

Another question asked to respondents was to what extent they perceived their household to be rich or poor. The answer scores were combined into two values: rich and poor. As with the question asking them to evaluate whether or not the household’s income is sufficient, it is striking that, for each household characteristic, some above the poverty line consider themselves poor while others that are below the poverty line consider themselves rich.

Experience and perceptions differ among respondents, even among those with similar living conditions. Respondents with the same level of prosperity can answer differently when asked about their perceived prosperity. People and households differ, for instance in terms of life patterns, spending behavior, their stage in life, individual perceptions of “rich” and “poor,” as well as the household’s mood at the time of the survey.